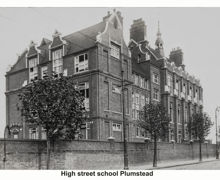 High Street site as it originally looked when first built

The school opened for children on the following Monday 9th January 1893. Children entering the Elementary Schools were placed in Standard I or Standard II, according to their ability.

The school was built for 850 children and, by the end of the year, approximately 720 pupils were on the roll of the Elementary Schools alone. A decision was made the following year to extend the school, to accommodate up to an additional 400 pupils. The extension was built over arches, thereby incorporating a covered playground.

Attendance was very poor – reasons being diseases, many of which have either been eradicated or are rare these days (small pox, quinsies, diphtheria, erysipelas, tuberculosis), the Sanger’s Circus parade, the Queen’s Birthday (for which the Arsenal – where many of the children’s fathers worked – would close), hop-picking in Kent, “helping mother” (after the birth of a sibling) and chilblains or “no boots” during freezing and snowy weather.

Bare-footed children in Plumstead were not unusual and parents really had to choose between providing boots for and feeding their children. The school received donations of boots and clothes from businesses, charities and the Plumstead Relief Society.

During the first few months that the school was opened, workmen had to be called in because windows did not fit properly and the school was draughty, cold and suffering from leaks.

The right to use corporal punishment was delegated to teachers in writing by the School Board – one deputy headteacher refused this right.

There were very few teachers in those days – for instance, in the boys’ elementary school, there were only five to start with (in addition to the headteacher) – so classes were very large, consisting of about 60 children in each. This meant that the school had to close on the occasion of a school trip – to the zoo, for instance.

Schools received funding from the Government based on day-to-day attendance, so both the school and the London School Board introduced a variety of schemes to encourage attendance. Children who attended school every day were rewarded with extended playtimes and early hometime on a Friday! The Board awarded medals to children who had both 100% perfect attendance records and had also displayed impeccable behaviour, typically by Mr Dawson, who was Chairman of the School Managers.

At Christmas, the boys watched a “Magic Lantern” (slide projector) show and some of the girls were invited as a reward for good attendance. Girls who received ten red marks during the week were rewarded on Friday afternoons with a free play session in the hall for fifteen minutes. Subjects taught to the boys were Scripture (RE), Mental and Written Arithmetic, Reading, Writing (Composition and Dictation); Geography, Elementary Science, Singing, Drawing, PE, Maps, Recitation and Mechanics.

The Girls did not have formal lessons in Science nor mechanics. Instead, they did Sewing, Laundry and Domestic Economy – in which the female teachers took the opportunity to teach as much Science as possible – evaporation/condensation, how coal is formed, etc.

During the Second World War, children and teachers were evacuated to Kent. The school was used as a rest centre for people whose houses had been bombed or who lived in streets awaiting the removal of unexploded bombs. The Rest Centre was very crowded, as it catered for people from both sides of the River. The basement was used as an Air Raid Shelter – the walls were reinforced with sandbags and the windows were bricked up.

On the drizzly night of 19th April 1941, during London’s 545th air raid, a fireman and a civilian were killed in a blaze which destroyed the top floor and attic. The above picture, showing the war-damaged building, was taken in 1955, ten years after the War!

By 1960, the upper levels had been removed and the remainder of the building adapted. Most of the rooms under the arches were used as playground shelters. 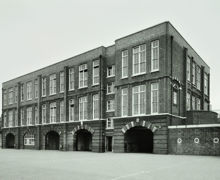 The end of the War saw many changes, not just to the structure of the school building, but to the national education system. 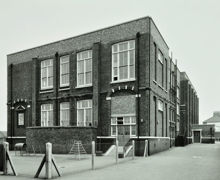 The school leaving age was raised to 15. There have been many changes since, including the introduction of the National Curriculum in the 1990s. A major difference since the 1890s is the use of communication technology.

Bannockburn celebrated its Centenary in 1993, with the whole school being transformed, so that the children could learn about life in Victorian times.

We shall be hosting two Nursery Open Sessions for prospective parents to come and view our nursery.

To register please use this link

We wish to share with you a new website which has a wealth of support and guidance for you as parents and carers.

Place2Be Parenting Smart is for all UK parents and carers of 4-11 year olds. The Parenting Smart site is completely free to use and access, full of tips and advice on a range of topics including transition to secondary school, meltdowns, and sleep difficulties (and so much more!).